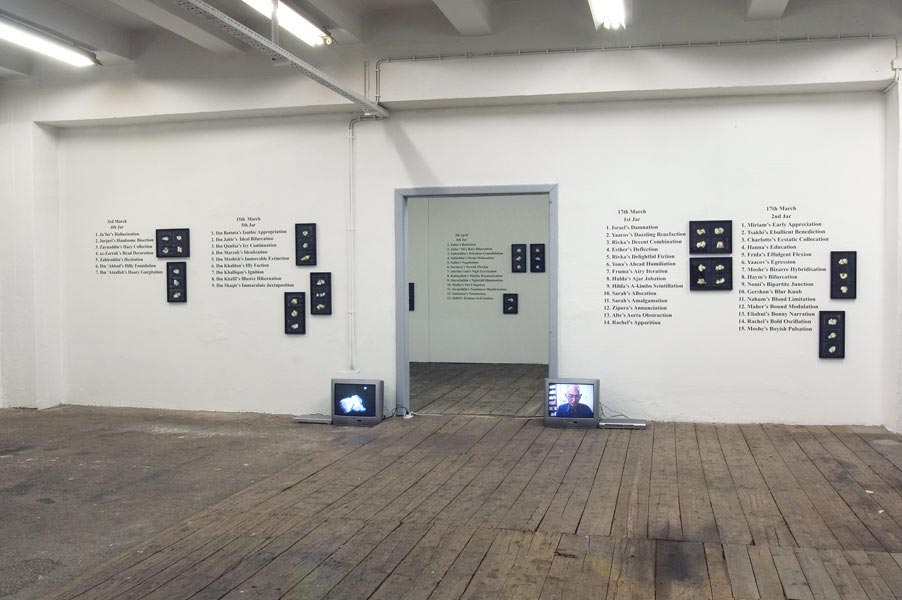 KEFIR GRAINS ARE GOING ONTO THE FLIGHT

Galerija Gregor Podnar and DUM Association are pleased to announce the exhibition Kefir grains are going onto the flight by Yuri Leiderman.

Yuri Leiderman’s approach involves different stories and occurrences connected to his personal life experiences and obsessions, and transformed into a sophisticated system of visual signs and codes. At Galerija Gregor Podnar we show a big size installation consisting of drawings, texts on wall, video works, and objects. This is the final version of already several years lasting Yuri Leiderman’s  kefir grain story: “Kefir grains look like whitish lumps, bizarre forms floating in the milk. By turning milk into kefir, the grains are capable of growing and giving life to their ‘breed’. In this sense they can be regarded as living beings and can be given, for instance, individual names according to the special rules, like the ones that exist for pedigree dogs and racing horses (Grains from the same jar must have names beginning with the same letters, etc.).

In spring 2001, while I was in Jerusalem, I grew kefir grains and gave them names according to the following rules: the first part of the names were obtained from the given names of real people who died by natural causes in Jerusalem on the same day when this or that grain was born (i.e. Aharon’s, Haym’s, David’s, Lea’s, Rachel’s, etc.)

In the spring 2003, while in Moscow, I grew new batches of kefir grains. Their names were similar to the previous case, but this time, Jewish names were replaced by Muslim ones. (Their names were taken from J.S. Trimingham’s index ‘Sufis order in Islam’. The second part of their names remained the same). After the series of experiments and examinations, I selected around hundred of the most worthy specimens; these were taken on board of a Russian space programme training plane and released into zero gravity.” – Y. Leiderman, 2003

Yuri Leiderman (born 1963 in Odessa) is a writer and an artist whose practice has been closely related to Moscow Conceptualism. In 1987, along with Sergei Anufreev and Pavel Pepperstein, he founded the Medical Hermeneutics group, which he left in 1990. His work has been shown at prominent venues, the 1st Manifesta in Rotterdam in 1996, the 11th Sydney Biennial in 1998, or the 50th Venice Biennial in 2003, among many others. In 1999 he held his first solo presentation Circles and Lumps in Slovenia at Galerija Škuc in Ljubljana.  Yuri Leiderman is currently participating in the 7 Sins, Ljubljana – Moscow Arteast exhibition at Moderna galerija / Museum of Modern and Contemporary Art in Ljubljana.

The exhibition has been made possible in collaboration with Ministry of Culture of Republic of Slovenia and MOL – Cultural Department of the City of Ljubljana. Special thanks to The Arts Catalyst, Yona Fischer, Andrei Silvestrov and Roman Uranjek.